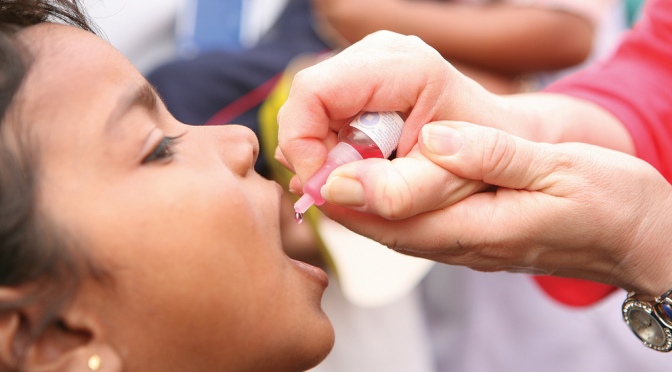 Polio is a disease that has seemed to fade away in the United States since the introduction of the polio vaccine in 1955. However, this disease is alive and well outside of the US despite a strong push by international agencies such as the WHO to eradicate polio in the last few decades. In fact, in 1988 the WHO pledged to eradicate polio by 2000, but this dream has yet to reach reality. Why is the eradication of polio less successful than the effort to eradicate Smallpox, a goal achieved in the 1970’s? These difficulties come from the nature of polio itself and the special challenges it poses to those who would halt its transmission.

The disease polio is caused by poliovirus, a member of the picornaviridae family. It is transmitted person-to-person through the oral consumption of contaminated feces (yes, this happens much more than we want to admit). This means that it can be transmitted directly between persons and by contact with contaminated surfaces or water. After exposure it can take anywhere from 5 to 35 days to develop symptoms of disease. However, the classic American image of polio and iron lungs is not representative of the normal outcome of infection. Up to 90% of people infected with polio virus will never show symptoms of the disease despite shedding large amounts of virus in their stool. Of the remaining 10%, roughly 4-8% will develop a minor illness of little note, while 1-2% develop aseptic meningitis and a remaining 0.1-2% may develop the classical symptoms of paralytic poliomyelitis. When only a small subset of those infected actually show disease it makes it difficult to contain and stop the spread of this virus. This has been one of the many confounding factors in eradicating polio.

Thankfully, we have two effective vaccines for polio currently available, the Oral Poliovirus Vaccine (OPV) and the Inactivated Poliovirus Vaccine (IPV). It is important to note that the OPV is markedly more affordable than IPV at $0.14-0.165 per dose, does not require an injection, and that OPV is the current vaccine being used by the WHO in the attempt to eradicate polio. However, this approach has some drawbacks. This is due to the fact that persons given the OPV are actually producing live virus in their intestines. This virus is not dangerous in vaccine form, but there is a very small chance that the virus will mutate and revert to the virulent wild type in a person’s gut. If this happens, and apparently healthy, vaccinated individual may then pass that mutant to unvaccinated individuals that may then come down with the disease. For example, while it has been considered “eradicated,” there is still vaccine-derived serotype 2 polio circulating and causing cases of paralytic polio and acute flaccid paralysis in endemic regions such as Nigeria. Another drawback to the OPV is that out of every 2.5 million doses there will be one case of polio (vaccine-associated paralytic polio or VAPP). However, this rate of paralysis is very reduced compared to the number of cases that would occur without the vaccine in place. This aspect of the vaccine, coupled with the fact that some persons with specific immune deficiencies can harbor virus and shed it into the environment for upwards of 10 years, makes it difficult to achieve true eradication with the OPV.

However, countries with the economic means have largely switched to the IPV, which does not use a live virus, and does not result in a person shedding virus (of significance for long-term immune compromised individuals who may shed virus for long duration if given OPV). Because of concerns over circulating vaccine-derived poliovirus it is not feasible to suddenly stop vaccinating with the OPV. Therefore eradication cannot take place under the current protocol, budgetary limitations, and with the current tools at hand. However, this is not a case against the OPV, as it is currently the best tool we have for controlling polio within the current socioeconomic limitations.

So where do we stand and what do we do? We have the tools necessary to wipe out this disease using the IPV but not the necessary funding and social momentum. Also, increasing skepticism in vaccinations both at home and abroad has led to repeat outbreaks and transmission of the disease back into areas where it has been eradicated. However, if we can continue to steadily focus vaccination programs on the few remaining regions where polio still thrives we have a significant chance of eradicating this disease and improving the lives of millions of people.

If you would like to learn more about the effort to eradicate polio please visit the Global Polio Eradication Initiative website.

6 thoughts on “The Problem with Polio”